Handling the Unexpected in Your Real Estate Business 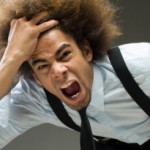 Right now I have three rehabs underway. Of the three, 2 are over budget, one is more than 2 weeks behind, and one has been temporarily shut down by the city because my contractor never applied for permits.

During my last rehab, I fired my contractor half way through construction and was forced to re-do much of the work that had been completed. In January, I had settlement on two wholesale properties pushed to February, and now to March, because of unresolved title issues.

Real estate is a complex and often unpredictable business. There are a lot moving parts that depend on one another for a project to move smoothly. Bumps along the road are inevitable. Whether the glitch is a title issue, an uncooperative seller, or a problematic contractor, it is important to remember that sometimes things are going to go wrong.

The key to ongoing success is handling these setbacks and moving forward.

When I was growing up I remember a picture that my father had hanging on the wall in his office. It was a drawing of a stork eating a frog. In the image, the stork had half of the frog down his throat, but the frog was not going without a fight. His arms poked out the corners of the stork’s beak and reached down to the bird’s throat choking him. At the bottom of the drawing was a simple phrase: Never Give Up.

Persistence is definitely part of becoming a successful Real Estate investor. Without a drive to succeed at all costs, the road is often more difficult than most can sustain. But persistence is not the only important attribute to ongoing success.

A clear head and controlled emotions also play a vital role in Real Estate investing. When things inevitably go wrong, a calm persona promotes good decision making when a stressful situation is at its worst.

My projects will be back on track within the next few days. I know, because I’ve been here before. After firing my contractor during the last flip, I was able to right the ship and finish on budget within 10 days of my initial completion date. The property went under contract in 14 days for full asking price and settled 30 days later. It all works out in the end.

Nothing ever goes quite according to plan when you’re dealing with a Real Estate investment. So plan for catastrophe. The greatest success is often earned by the one who keeps his head when everyone else is losing theirs.